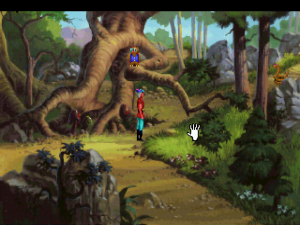 My Twitter feed this week has pretty much transformed into a Double Fine IV drip. Each day has given me a steady supply of information on the studio, first regarding Minecraft developer Markus “Notch” Persson offering to fund a Psychonauts sequel, and second, a Kickstarter campaign designed to let users fund a new, traditional adventure game. While the former development is currently being hashed out in private (or may be dead? I don’t know), the latter has reached a very public conclusion less than a day after its appearance: Double Fine will be making an adventure game again.

All of this begs the question of what kind of place a new entry to the antiquated genre — even one developed by some of the masters of the form — would have in today’s climate?

One of the first videogames I ever played was King’s Quest V. My dad bought a computer sometime when I was a little kid, installed it in a spare bedroom and picked up a handful of educational games for my two older brothers and I to play when he wasn’t using it for work. At some point, after tiring of Math Blaster (you didn’t hide your learning that well, Blaster), Prince of Persia and King’s Quest V appeared on that computer. While Persia was a constant, it was usually played solo. King’s Quest, on the other hand, was a joint project that was completed over what seems like years of my childhood.

It worked like this: on the occasional Sunday afternoon my brothers and I would end up at the computer at the same time and launch the game. We would play until we ran into one of its obtuse puzzles then try to talk out its solution over time. If it was impossible to figure out that, say, a bear could be distracted with a fish to get a stick to distract a dog to get a favour from some ants to get a needle from a haystack to do whatever comes next, then we’d leave the computer for the day and try again another time. I’m pretty sure we didn’t finish King’s Quest V until a year or two after we first started it and, at the time, that was perfectly all right. We didn’t have any other consoles and (Prince of Persia aside) no other games to play that weren’t crammed full of math equations. Despite how nonsensical/overly specific some of the game’s puzzles could be, we didn’t know that a videogame could demonstrate an interesting story in any other way. So we, like so many kids of our generation, developed a fondness for the adventure genre based on a limited understanding of, what was at the time, still a fairly limited medium. 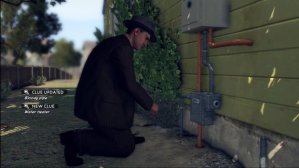 This is a style of gameplay that I’m not convinced can work so well anymore. The videogame industry has grown by incredible leaps and bounds since the early 1990s of King’s Quest V, and with this growth the variety of experiences it offers to players has expanded as well. If my brothers and I were kids today it’s more likely that we would have found the same style of adventure game gratification from titles like Portal or, maybe Double Fine’s Stacking and Team Bondi’s L.A. Noire — abstracted versions of the same principles presented by traditional adventures. Today’s gameplay has conditioned players away from the type of head-banging-against-wall patience that so many adventure games demanded. Even modern games that call back to the genre are redefinitions to the point where modern players hesitate to classify them as belonging to it. L.A. Noire, as one example, succeeded because it allows players to solve puzzles with environmental clues, but also breaks adventure game confines by throwing in gunfights, brawls and car chases. That progression in Noire is never halted because of needlessly complicated mysteries (finding clues correlates to success in interrogations, but failing to do so doesn’t entirely stop the story from moving forward) helps illustrate a way in which the genre could become less frustrating.

As gifted as the developers at Double Fine — and, particularly, founder Tim Schafer — are, it’s difficult to wonder if a modern point-and-click (re: purist) adventure will truly satisfy anyone but the stubbornly nostalgic. We can all be sure that the writing will be great, that the jokes will be some of the funniest in games to date and that the visual design will be lovably offbeat and distinctive. What seems less of a certainty is whether or not actually playing the thing will be any fun. This seems like it will depend mainly on how willing Double Fine is to bend the rules a little bit and trim the fat from the adventure game.

Certain genres still contain features that are extremely indicative of the technological limitations that guided the design of their first entries. The menu-based combat of Dragon Quest or Final Fantasy stands in evidence of this, specifically because the role-playing conventions established in the early entries of the two, massive JRPG series demonstrates the differing evolutionary paths of nostalgic mechanics. Dragon Quest continues to feature the same turn-based, first-person perspective battles of its predecessors while Final Fantasy (for better or for worse) has experimented with more robust technology to provide action-based fighting through its Active Time Battle, Paradigm and Gambit systems. Some would say that one feels more like a “proper RPG” than the other. It all becomes incredibly muddled. Which features exist only for the sake of nostalgia and which represent actual, quality game design? So much of it is subjective that it almost feels besides the point.

If Double Fine’s adventure game uses the exact same mechanics as its forebearers it will alienate many players while delighting others. If it, like Dragon Quest, abandons some of the obscurity of its puzzle design in favour of a traditional but streamlined approach, it has a much better chance of being relevant to the old guard and newcomers alike. After all, last year’s runaway hit, the iOS-released Superbrothers: Sword & Sworcery EP, makes an argument for the viability of a contemporary adventure game.

Sword & Sworcery EP is, at its core, another iteration of the King’s Quest I played as a kid. The difference is that it refused to be as frustratingly esoteric in its puzzle design as it very easily could have. This seems to be because it was created by developers who perhaps love adventure games, but understand that there are many aspects of the genre that simply don’t need to exist. Puzzles are tighter and usually confined to only a few screens. Their solutions are often inherently logical — the first time the player realizes that touching glowing blips to create a musical scale actually works is wonderfully intuitive — and the result is a deeply traditional videogame that feels like something fresh and new. Double Fine, though, is staffed by the kind of people who essentially created the genre (the game will be created by not just Schafer, but fellow Lucasarts’ veteran Ron Gilbert as well). Will they possess the ability to see how much of what they accomplished in the past is no longer relevant, or will their former glories loom too large for them to provide yet another kick in the pants of a stagnating type of videogame?

It seems to me that the only way the adventure game can continue to survive (and now is its best shot at showing that it deserves to) is by being ruthless enough to cut away the elements of design that nostalgia may call worthwhile, but modern gameplay has outgrown. But this is all conjecture, of course, and we’ll have to wait until October to see the result of this landmark in crowdsourcing. Much like what Schafer himself says in the (wonderful) Kickstarter campaign video, whether Double Fine’s return to the past manages to become a fantastic game or a glorious trainwreck, playing and learning from its release is sure to be worthwhile for the videogame industry.