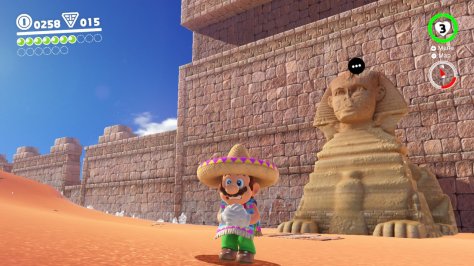 Super Mario Odyssey is meant to be a space of pure fantasy and imagination, no prerequisites required. It’s part of what makes the character and the games he stars in so accessible. Whether child or adult, knowledgeable or not, the idea is that the basic joys of running around the series’ fantastic worlds should be appealing enough that no further education is required. It’s bizarre, then, to encounter in Odyssey pieces of our real world, from Mexican ponchos and living Mesoamerican statues to Egyptian sphinxes, Polynesian moai, Japanese castles, and the gowns and tuxes of modern weddings.

Like so many Mario games, Odyssey is the product of fevered imaginations. Its levels span relatively mundane locations like a bustling Manhattan-style urban metropolis and thick-pined forest to a land made entirely of food, chunks of roast meat and cobs of corn floating on rivers of boiling cheese or pink sugar. Mario, able to buy new outfits and toss his now-living cap onto enemies and objects to temporarily steal their form, quickly ditches his familiar overalls to dress as a clown, businessman, or much, much else. He possesses others and turns into everything from an imposing Tyrannosaurus and squat, fanged Goomba to a manhole cover or ball of electricity. It’s probably obvious from all of this that Odyssey is enormously imaginative—an exercise in free association, one idea following another with dreamlike logic.

The creativity of the Mario games is what makes them so compelling. Bouncing around their architecture feels like inhabiting a child’s sketchbook, taken seriously enough for talented artists to bring even the wildest concepts to life and use them as the foundation for crafting navigation challenges. Make Mario less offbeat—replace Odyssey’s anthropomorphized cutlery with cartoon human chefs, say—and it would become something far less surprising than the unhinged creativity that makes moving from strange world to even stranger world a delight.

The entire game gives the impression (which is no doubt untrue) that its design ideas were never dismissed for being too outlandish. The result is that Odyssey feels like it’s never thought twice about what it’s showing. This is the reason not just for its wonderful sense of energy, but also the few times it runs into trouble, too.

When abstracting reality through talking forks and human snails, nothing specific about global societies is signified. But entering a world where cultural markers as immediately recognizable as sombreros and Día de los Muertos skulls are repurposed as a supposedly neutral aesthetic is disorienting on a pretty profound level. These references are meant to be as fantastic as every other part of the game, apparently without consideration given to the fact that they represent specific elements of our world. From having Mario run around in a construction worker’s costume to his dressing up in a poncho and sombrero or full set of samurai armour, there’s an uncomfortable assumption that the audience is meant to take for granted that specific cultural iconography is nothing more than visual set-dressing. Combine this, too, with the continued appearance of the long-running Mario plot staple that sees, again and again, a kidnapped princess who can be saved only by the efforts of her eternal boyfriend (only now she’s being forced into the more creepily specific scenario of a captive shotgun wedding) and the mix of factual and invented aesthetics becomes a strange whirlwind where it’s impossible to tell what aspects of the experience is meant to be completely alien and what’s meant to be a one-to-one representation of reality.

In her Odyssey review, Julie Muncy notes that the game “ . . . runs into problems when it gets too caught up in its own playfulness and forgets that there is, in fact, a real world out there.” She, too, sees all of this arise from the same unthinking act of imagination that makes the rest of the game so visually fascinating: “ . . . the game is so caught up in its own dream logic that it fails to recognize that these are real cultures that are being playfully considered, mashed together, and then tossed away an hour later.”

This argument is spot on and, as discussed in Muncy’s review, the general result of these strange inclusions is a few unfortunate hiccups that interrupt but don’t diminish Odyssey’s otherwise potent effect. And yet, it feels important, too, to zoom in on this aspect of the game and refuse to let it be absorbed by the whole.

While never portrayed with anything like deliberate malice—and always coming across as if borne from a brainstorming session where nobody was on hand to moderate—Odyssey’s cultural references prompt a nagging, difficult question: Where can the line can be drawn between which aspects of the real world are acceptable fodder for imaginative reinterpretation and which require more context?

If audiences are to enter into these games with no required understanding of the world (Mario will never presume you’ve cracked an atlas or paged through an encyclopedia before you start playing) then they also face the unavoidable problem of having to recognize that nothing created by humanity exists in a vacuum. What may be a flip reference to the architecture of Mesoamerican civilizations could be harmless at one point in time or one specific place yet end up becoming something altogether different in another temporal or geographic context. Mario in a sombrero, in other words, has a different meaning in 2017 America than it does in, say, 1973 Australia (or, to put a fine point on it, 2017 Japan). Portraying another culture always reflects a political viewpoint or moment, even if muted, no matter how hard an artist fights to portray their work as “neutral.”

As David Shimomura points out in an article discussing the deafening silence of mainstream game critics on Odyssey’s cultural references, associations are made between Mario dressed as a Mexican stereotype and the reality of living as a Latin American in a time where the nation’s president and his supporters produce racist policy designed to vilify a demographic viewed as a demonized caricature by the ignorant.

This is a clear example of the importance that something as seemingly innocuous as including a fantasy Mexico takes on when larger context is considered. And it’s a problem that will occur over and over again if more thought isn’t put toward what kind of real-world references are and are not suitable for the free association design of something like a Mario game.

The Mario series has to continue venting its designers’ imaginations not only because its willingness to embrace the weird is such a large part of what makes the games so enjoyable, but also because the distance it places between reality and its fantasy world allows space for its audience’s creativity to flourish, too. The flip side of all of this is that where our imaginations take us is informed by what we do and do not know about the world around us. Not understanding that there is meaning to the Egyptian, Japanese, or Mexican motifs featured in the game beyond their colour and shape can lead to a distorted view of other cultures. Those who know better aren’t likely to be affected—they’re aware that Mario is hardly to be taken seriously. But Odyssey doesn’t ask that you know anything at all about the world in order to enjoy what it shows. Its language is meant to be entirely formed from the intuitive stuff of a character’s motion and how it feels to guide him along his way. Everything else comes from our inborn response to the images on the screen, for better or for worse.

Reid McCarter is a writer and editor based in Toronto. His work has appeared at GQ, The A.V. Club, Kill Screen, Playboy, Paste, and VICE. He is also co-editor of SHOOTER and Bullet Points Monthly, co-hosts the Bullet Points podcast, and tweets @reidmccarter.