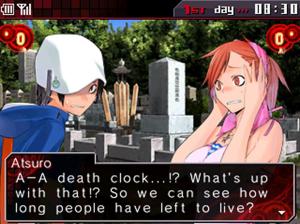 The Shin Megami Tensei series is unique in that it combines the common tropes of Young Adult literature with something only video games are capable of: it places the player in a situation and asks them what they want to do. Some of the series’ games tend strongly towards the mundane (Persona) while others go off the deep end (Nocturne), but they all feature regular people in insane realities.

Devil Survivor, though, manages to blend the tropes of YA post-apocalyptic literature and the Megami Tensei series’ twisted view of the mundane.  You embody a normal high school kid, and the game tells you demons are real, the city of Tokyo is locked down, and you’re going to die tomorrow. It tells you that and watches how you react.