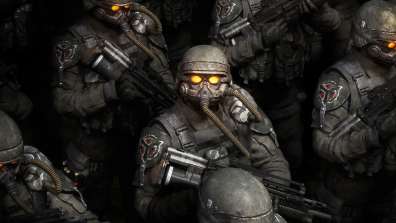 Killzone 2 exists in a strange place where the Michael Bay inspired bombast of Modern Warfare shares space with the gore-soaked dialectics of The Iliad. For all of its surface problems (and there are many), it is a game about shooting dudes that frequently attempts to impart something far different than the mindless jingoism of its brethren. Killzone 2 has a generic science-fiction plot — the “good guys” of the Interplanatary Strategic Alliance (ISA) are fighting a war against the “bad” Helghast army — but it is also a story about the futility of assigning values to combat fuelled by nationalism and historical injustice.

War is hell, it says, and not just for our team.