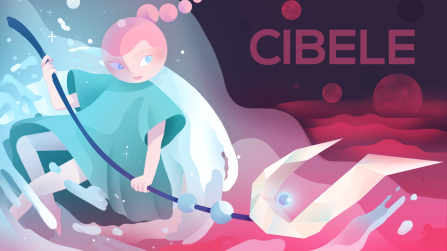 *This piece discusses Cibele as a whole. I recommend playing it first before reading if you’d prefer to discover the plot for yourself.*

Playing Cibele is profoundly uncomfortable. The game’s subject matter is innocuous enough—it follows a young woman as she falls in love with an online friend—but, the way developer Star Maid Games presents this story turns what could have been a dispassionate anecdote into an experience that feels as intimately invasive as snooping through someone’s diary.

Cibele is written and designed by Nina Freeman, who, regardless of how fictionalized its depiction is, puts a lot of herself into the game. The player is cast as her. They can explore her desktop, reading her poetry and old blog posts, checking her email, and browsing folders filled with selfies. Each of these documents is intensely personal. Some date back to when she was 13 years old, others are from the period when she’s moving from high school to college. All of them—even those that have presumably been posted on social media in the past—seem far too private to look at.

From time to time, new emails and off-brand Twitter/Instagram feed notifications pop up on the screen. The player can look at them and learn even more about what’s going on in Nina’s life before opening the only other program pinned to the taskbar: a fictional online role-playing game called Valtameri. Within this game, a whole new area of Nina’s social life is opened up through in-game chat messages and, most importantly, ongoing calls with another Valtameri player named Blake.

In these sections, Blake’s voice comes through the speakers with Skype-level audio quality. Nina’s voice, on the other hand, seems closer—like it’s coming from the player’s own head. Cibele (which is also the name of Nina’s Valtameri character) is a series of vignettes containing all of the above elements. The player checks out her 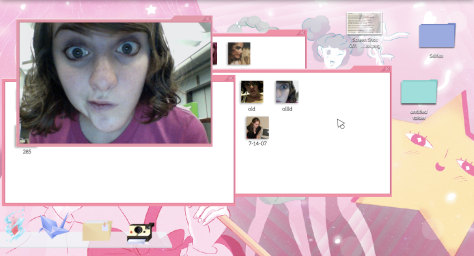 desktop, email, and social media feeds, then plays Valtameri and listens to Nina and Blake flirting. Time passes, marked by webcam-style videos of Nina in her room, and the process repeats.

This is an inventive approach to telling a story of online romance. It’s also a clever way to explore the intersection of the virtual and personal, showing rather than telling how the internet brings people closer together while fundamentally alienating us from one another, too. From Nina’s desktop, we see various social circles that range from real-world friends (emails from professors, photos, and chat logs about high school and college parties) to online ones (messages and emails from other Valtameri players). Blake and Nina’s relationship, which transitions from flirtation to declarations of love and plans to meet up in person, shows how these supposedly disparate circles can overlap.

When the two eventually meet, they have sex—the first time for them both—and Blake leaves saying that he doesn’t want to have a real-world relationship with Nina. The intimacy the two have established online crumbles. In Valtameri, Nina and Blake play alongside one another as a team and, appropriately, each session within the game sees the pair cooperating to kill monsters and a final boss. This level of abstraction—Nina and Blake are obscured first by their physical remove, then again by their game avatars—erodes as the two start sending each other photos and talking on the phone. Proximity, their last barrier, is completely destroyed when they do meet up. When they have sex they reach the closest physical point that two people can share and everything breaks. Despite the closeness the player has felt in getting to know Nina through her computer, we can’t predict what she’ll do throughout Cibele’s story. The same is true of her interactions with Blake. She’s able to fall in love with him online, but, even though the two of them have held almost nothing back from one another in a digital space, he’s ultimately a different, less predictable person when that barrier’s gone. 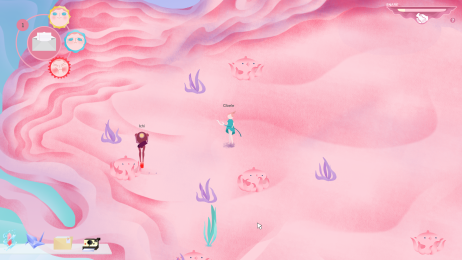 Cibele, in its plot and presentation both, asks the player to consider how proximity to a person informs our understanding of them. It shows that even those we’ve made a deep connection with are unknowable in the end. This is only exasperated by the internet’s degrees of separation. The game shows us Nina’s online social life, which is obviously one step removed from her inner thoughts as represented by poetry and old selfies. Blake’s unceremonious, shitty decision to leave Nina at the end of the game is forecast by Cibele’s constant reminder that who we are online isn’t necessarily the same as who we are in real life (even if we try to be as honest as possible). This is established right from the start as the player explores a teenaged Nina’s old blogs, which, in the style of Livejournals everywhere, catalogue interests and self-select favourite movies/music/etc. in order to best present herself to the outside world.

That we’re made so uneasy by even this level of access to a person’s life shows the messiness inherent to mixing our private and personal lives online. Cibele blends the self-mining literature of Karl Ove Knausgård with the subconscious exhibitionism of Twitter, YouTube, and Facebook to make the point that we are all memoirists now. And with our decision to display ourselves so nakedly and so publicly, we open ourselves up, too, to the kind of heartbreak that ends the game.

Reid McCarter is a writer and editor based in Toronto. His work has appeared at Kill Screen, Paste, VICE, Playboy, and The Escapist. He is a co-editor of SHOOTER (a compilation of critical essays on the shooter genre), co-hosts the Bullet Points podcast, runs Digital Love Child, and tweets @reidmccarter.