The collectible is a staple of videogames. They’re scattered across maps, offering a little, typically optional incentive to further explore the environment, solve miniature puzzles, or otherwise increase the time spent playing a game. Because most collectibles are usually pretty disposible–extra scraps of text or, in the most cynical instances, nothing more than quota-filling glowing objects–they’re usually pretty safely ignored.

Uppercut Games’ Submerged attempts a subversion of this by centring its design around what is essentially a prolonged exercise in merging story and collectible hunting. The player controls Miku, who spends the length of the game trying to keep her younger brother Taku alive by scavenging supplies from the flooded city she boats into during Submerged‘s opening, wordless minutes. This plot hook is simple enough that it hardly needs extra explanation–a kid is dying from the nasty looking gash running across his stomach and he needs help–but the history of the decaying, waterlogged world and its lone human characters serves as a basic sort of mystery to uncover. The crumbling skyscrapers and rusting monuments poking out from the waves show that the game’s setting was once a thriving metropolis. The whales and fish that occasionally breach the water are spotted with a green, malignant-looking mould whose origin seems to lie in whatever caused the world to sink into the ocean. These are the kind of visual cues that spur the imagination and, most often, foreshadow an explanation. 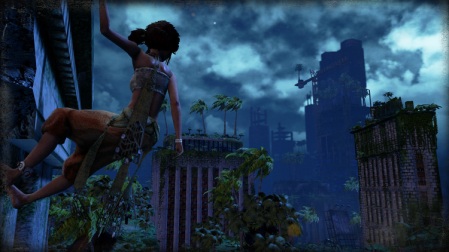 Soon enough, the player discovers that a few panels of abstracted shapes, a little reminiscent of prehistoric drawings, are rewarded every time Miku can find a glowing box from her fan-powered boat. Climbing up buildings and surveying the drowned landscape with a spyglass reveals points of interest where medical supplies or new story images can be found. Hunt down these boxes and the plot starts to fill in. And so Submerged becomes a boiled down version of so many modern videogames: progression is encouraged by exploiting the player’s natural desire to check items off a list or declutter a map filled with attention-grabbing spots.

Blurring the line between “main” and “side” objectives is an idea with plenty of merit, but Submerged doesn’t really nail the balance well enough to subvert the weird distinction traditionally implied by these separations. The “main” story unfolds naturally enough, the mute pantomime that bookends each return to the brother revealing new bits of the sibling’s backstory and showing how they’re holding up–mentally and physically–as the journey progresses. But whatever isn’t deemed absolutely necessary to the core of the plot–the relationship between Miku and Taku–comes across as weirdly ancillary because, despite providing supposedly important context, it’s presented as optional.

This is a bizarre approach, only barely acceptable due to the skewed view of storytelling so many mainstream games take. In any other medium, aspects of a work’s narrative that the creator could possibly consider “non-essential” still serve some purpose. A plot thread that goes nowhere; a description or audiovisual element that initially seems superfluous–these are still important ways to establish theme, tone, character, or plot. It’s only in games that diversions like sign-posted “side content” are marked out as unimportant by their creators.

Historically, this makes a certain type of sense, even though hiding context from the audience is still poor design. Videogames, likely as a holdover from the arcade days, are stuck on the idea that player investment must always be directly rewarded. Time spent poring over an environment should give the committed person a pay-off that enriches the game. In the best case scenario, the reward is an unnecessary, but still welcome item or skill increase meant to soften future challenges. In the worst, deviating from the “main” or intended path provides narrative context that is meant to enrich the plot. The nuances of stories are meant to be found beneath the surface of a holistic reading, though, not tucked away in places where they can be mistakenly bypassed. Submerged balloons this issue by making its entire story–“main” and “side”–a collectible. The player who doesn’t search out every last pick-up won’t have the raw material necessary for understanding what the game wants to say.

Once the audience has begun to equate collectibles with narrative expansion, the mechanical framework of Submerged‘s foundation is laid bare. Each “main” objective feels like just another collectible, arbitrarily deemed more important by the designer’s hand. Tying plot progression to item collection brings attention to the fact that the game world–its people, its history, its very existence–is nothing more than a system. While most stories are the product of (usually deliberate) thought and (usually practiced) technique, hiding this fact allows audiences to more fully invest themselves in the work. By focusing itself so fully on the most mechanical aspects of game design, Submerged doesn’t just weaken its narrative–it also makes what is meant to be an emotional story come off as calculated.

Reid McCarter is a writer and editor based in Toronto. His work has appeared at Kill Screen, Paste, VICE, Playboy, and The Escapist. He is also co-editor of SHOOTER (a compilation of critical essays on the shooter genre), runs Digital Love Child, and tweets @reidmccarter.