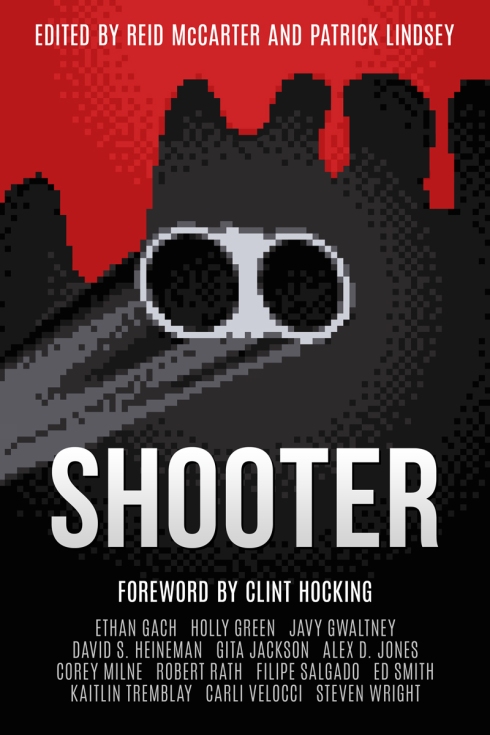 So, last December I announced SHOOTER, a collection of criticism about games with guns, here on Digital Love Child (and posted an older, slightly different version of its cover). Now, after many further months of work, we have a release date!

SHOOTER will be available to purchase on June 2nd, 2015 at shooterbook.com.

It includes 15 chapters from a diverse group of some of the best videogame critics around, accompanying illustrations by (the nastily talented) Paul Sousa, and a foreword by (professional smart guy) Clint Hocking, Creative Director of Far Cry 2 and Splinter Cell.

It’s an electronic book (or “e-book” if you’re cool) and available in PDF, EPUB, and MOBI formats.

I hope you’re as excited to read it as we are to finally release it!

Reid McCarter is a writer and editor based in Toronto. His work has appeared at Kill Screen, Pixels or Death, Paste, VICE, and The Escapist. He is also co-editor of SHOOTER (a compilation of critical essays on the shooter genre), runs Digital Love Child, and tweets @reidmccarter.

Patrick Lindsey is a game critic and occasional developer whose work can be found on Polygon, Unwinnable, and Paste. He co-founded Pixels or Death and co-hosts the Indie Megacast. Read his tweets @HanFreakinSolo, if you dare.