[This article discusses the entirety of The Witcher 2‘s plot]

There’s a brief, computer-generated video that plays after The Witcher 2: Assassins of Kings‘ credits have finished rolling. In it, a rural man collects wood in a forest glen. He spots a rabbit hopping through the brush and following a (much appreciated) fade to black he heads back home with the now-dead animal hanging from his belt. As the man starts to cross a wooden bridge he hears the thunder of approaching horse hooves, and a group of mounted knights in black armour ride pass him. The man hurries onward to his village only to find it burning and a sea of troops marching toward it from across a river valley. The game pulls out from the scene to show a map of the area and the sweep forward of the invading Nilfgaardian Empire’s army. Coloured a menacing black, the Empire’s borders extend upward to swallow the regions to the north of it, shading their multicoloured nations with darkness.

This moment sounds innocuous outside of the context of the game–it’s one fantasy nation taking over another. Those who have played through the previous twenty-odd hours of The Witcher 2 and invested in its fiction are more likely to understand the dramatic import of the moment, though. Players who think back on the history of Poland–the home of CD Projekt RED, the game’s developer–may react even more strongly.

There’s a school of historic thought that sees the fate of kingdoms, provinces, and nations as being dependent on their physical situation. Proponents of this theory may explain the outsized influence of the British Empire by the fact that it’s an island nation that was forced to develop a sophisticated navy to trade and wage war with its continental neighbours. They may point to its colonial expansion as something driven by its small size and need to acquire a steady flow of foreign resources to support its too-large population. Basically, in the environmental school of thought, the natural landscape of a people defines not just their economies and relationship to the natural world, but their cultural characteristics and historic trajectory+. Poland, in this view, is a nation that was always doomed to be occupied or otherwise subject to the will of surrounding powers since it lies in the heart of Europe, making it a strategically valuable position for empires interested in expanding in any cardinal direction.

Throughout history, Poland’s borders have been remarkably fluid, expanding during its time as the Polish-Lithuanian Commonwealth and contracting to nonexistence as Russia, Austria, and Prussia partitioned and absorbed the nation later on. After reemerging as an independent country again following World War I, Poland was mercilessly divided between Germany and Russia as part of the Second World War’s ill-fated Molotov-Ribbentrop Pact. It would then become one of the Soviet Union’s satellite states as a result of the Yalta Conference’s post-war divvying up of war-torn nations between Allied leaders. Until the weakening of Soviet power in 1989 and Lech Wałęsa’s 1990 election as a democratically elected President, Poland had been under nearly constant control by foreign powers. Nonetheless, it has also managed to survive its history, maintaining a cultural and national identity distinct from the many powers that have occupied it throughout the centuries.

Trying to define Polish identity isn’t something I’m either prepared or qualified to do. But, it’s enough to recognize that at least one small part of it–one I’ve glimpsed through traveling to Poland and countless conversations with my Polish in-laws–is defined by simply belonging to a group of people who have managed to hang on through an incredibly tumultuous history. Poland, as plenty of Poles will strongly assert, is different from its neighbours. The emphasis of that difference is some reflection of a culture rooted in the kind of defiance that comes from a people who, in distant and extremely recent history alike, have almost always lived with the anxiety of being swallowed up by surrounding nations. You can see this in Polish literature, visual art, and film. You can also see it in the country’s videogames.

The Witcher 2, perhaps the most internationally successful game to have been created by a Polish developer, certainly embodies the underlying fear that characterizes the nation’s history. The game’s events all take place within the fictional Pontar Valley–an area bordered on all sides by expansion-minded kingdoms. Each of the cities visited by protagonist Geralt of Rivia during the game are located in this area. He journeys through a region that lives with the constant knowledge that it is a potential military flashpoint, liable to be invaded at any time by the surrounding kingdoms that recognize its strategic importance. As the plot gets underway, The Witcher 2 sees its hero framed for the assassination of a Northern king, setting in motion a story that revolves around Geralt’s attempt to clear his name and uncover the motives of a conspiracy that seeks to destabilize the region by knocking off its key leaders. The intrigue is confusing and, with its endless use of bewildering fantasy place and personal names, almost frustratingly obtuse at first. But, as the player guides Geralt further through his quest, all of that alien information begins to crystallize into something that can be sorted out. It’s at this point that real-world parallels begin to emerge and The Witcher 2 reveals itself as a game that is more concerned with the home of its developer than the fictional setting in which it t 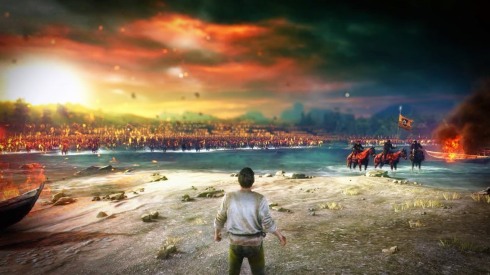 CD Projekt RED is staffed by developers who, by virtue of chronology, either remember life during Communist Poland or have grown up with stories from the time. The people who wrote The Witcher 2‘s script and brought its world to life may have been forced to learn Russian in school; to worry about their homeland’s role in a potential war with the West; to hear of occupation under Nazi Germany. It would be next to impossible to grow up in a culture like this and not express elements of it, whether consciously or not, in the art and entertainment you create. CD Projekt RED is not an exception++. They are the developers of a game set in the Pontar Valley–a land that is, like Poland, populated by people who are subject to the manipulations of the great powers surrounding it. They created a story where the leaders of the Northern Kingdoms attempt to destabilize its cities in order to further their own power bases. (The first chapter of their game involves a corrupt town mayor who extorts his own people and gets away with it because he’s in the pocket of the powerful Kaedwen nation. This mayor is depicted as one of the most despicable villains of the game and is a clear analogue to the sort of Polish government officials who “sold out” their nation to the USSR.) When fighting breaks during the many instances of diplomatic failure in the game, it’s the citizens of the Pontar Valley who are shown being thoughtlessly slaughtered or hiding in their burning homes as a result of the ensuing battles. This is also a game where an independent body of powerful sorcerers called the Conclave serves as a neutral, multinational peacekeeping body–a veritable United Nations that decides the fate of the powerless Pontar Valley by regulating the actions of its more powerful neighbours.

Put aside the superficial trappings of elves, dwarves, and an order of monster-hunting “witchers,” and The Witcher 2 looks a lot like a vital document of Poland’s national consciousness right now. It is that rare thing: a lavishly produced, mainstream videogame that feels as if it is saying something about the many people who created it. That knowledge makes the post-credits scene–the one where an unarmed peasant watches in horror as an enormous army invades his home–far more chilling than it would otherwise be. In that video the player sees an entire culture’s nightmare coming alive as history repeats itself yet again.

+ I’m almost positive I’ve messed up my explanation of environmental historical theory by over simplifying here. I’m only intending to introduce the concept as part of a larger argument.

++ I realize, too, that The Witcher games are based on the work of Polish fantasy writer Andrzej Sapkowski. CD Projekt RED uses the series’ characters and setting to write original plot lines for the games.

Reid McCarter is a writer and editor living and working in Toronto. He has written for sites and magazines including Kill Screen, Pixels or Death, Paste, and The Escapist. He is also maintains videogame site Digital Love Child. He tweets tweets @reidmccarter.