Apocalypse stories are as old as humanity itself. From the Norse Ragnarok and Sumerian flood myths to the centuries of religious doomsday watchers, people from across the world have long maintained an obsession with the end of days. In the postwar era, these stories have only become more common. The incredible destruction of the First World War, the nuclear detonations that obliterated Nagasaki and Hiroshima, and the impending devastation threatened by the Cold War standoff not only demonstrated that the annihilation of entire national populations was possible, but also that it was–and still is–downright probable in the event of renewed global conflict.

It isn’t surprising, then, that the last sixty-odd years have seen a widespread revival of fiction centred on the end of the world. Our species has attempted to come to terms with the inescapable possibility of our complete destruction–something that could happen, really, at just about any moment–by doing the only thing humans can be counted on to do: rationalizing an idea too large and frightening for us to easily comprehend. Rather than lose ourselves in existential despair at the incredible notion of the complete breakdown of our world, we compartmentalize this overwhelming anxiety through art. Post-apocalyptic fiction, probably the most popular example of this tendency, allows us to cope with enormity in the same way that apocalyptic myths helped our ancestors force narrative order on the unknowable vastness of a mysterious reality not yet made sensible through scientific discovery.

This attempt to impose logic on essentially disordered concepts is at the centre of all of these stories. The dramatic tension always results from this very struggle between control and chaos; order and the complete absence of it. It is especially clear in Naughty Dog’s The Last of Us, a game that uses its ruined world and two main characters to explore these themes.

[This article discusses plot details from the entire game, including the ending.]

The Last of Us is about many different things. It is a dark adventure tale, a tragic story of two people coping with grief, an indictment of patriarchal power dynamics, and, most of all, a post-apocalyptic drama. The game’s primary characters are Joel, a middle-aged man trying to deal with having lost his teenage daughter during the world-destroying infection’s outbreak, and Ellie, a fourteen-year-old girl born after society’s collapse who holds the cure for the zombie-style virus wiping out humanity. Joel and Ellie, while still having distinct personalities, are essentially archetypal figures. Joel is a symbol of masculinity, selfishness, advanced age, and order. Ellie stands for femininity, altruism, youth, and chaos+. The two of them clash in interesting ways throughout the plot, usually during arguments over the moral choices they must make while trying to survive a violent journey across the United States. The details of each of their disagreements change as the story progresses, but the common thread running through them is a clash between Ellie’s willingness to embrace the profoundly disordered nature of the nightmarish environment of which she is a product and Joel’s pragmatic approach to any situation that could disrupt the structure of his logical worldview. When Ellie wants to start using a gun–something that makes an awful lot of sense considering the number of monsters and dangerous people they encounter during their travels–Joel resists, not wanting to make a killer out of his young companion. In this instance, Ellie simply understands the chaos of her environment and accepts its nature while Joel stubbornly attempts to adhere to what has become an outdated sense of paternal responsibility.

When these two dynamics come into opposition with one another there’s a great dramatic effect. This isn’t a new thing. In critical tradition, Joel embodies the Apollonian virtues (logic, individuality, denial) and Ellie the Dionysian (chaos, universality, acceptance). The inherent conflict of Apollo and Dionysus is at play in most fiction, from Greek tragedy to modern blockbuster films, providing a source of tension between characters and lending gravity to plot developments. In The Last of Us, the balance between control and disorder is used to illustrate the two major forces of a post-apocalyptic setting–destruction and reconstruction–and is responsible for nearly every tragic or joyous moment. While this comes to a culmination for Joel and Ellie during the game’s final scenes, it can also be seen in other parts of the game’s world, too.

We see the character of Henry, who Joel and Ellie meet in Pittsburgh, enforcing ethics on his younger brother Sam when the former tries to take a toy robot from a ruined store they’re sheltering in. Henry reminds him that they’re only allowed to steal what they need to survive, imposing an irrelevant moral standard on his brother in order to keep him from succumbing to a desire for Dionysian gratification. Another character, Marlene, is the leader of the Firefly faction working to beat back the country’s new totalitarian military order and find a cure for the infection. She represents the other side of the dichotomy. Though they seem to have a hierarchy and internal guidelines, the Fireflies’ willingness to work outside of the post-apocalyptic government makes them come across as anarchist rebels, free of legal constraint, in opposition to the brutal, fascistic agents of the police state controlling the game’s Quarantine Zones.

The Last of Us always keeps Joel and Ellie at the centre of its drama, though, and it’s the last conflict between these two characters that marks the height of the game’s exploration of the control/chaos dichotomy. The goal of their journey west is to hand Ellie over to the Fireflies so they can 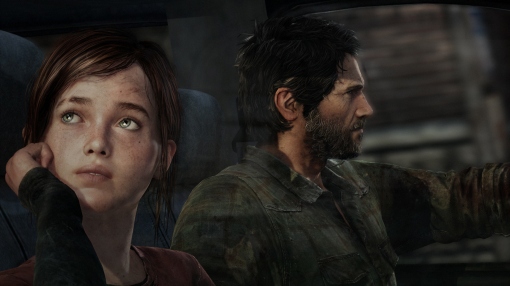 use her immunity to infection as the basis for creating a vaccine. When Joel learns that Ellie must die in order to retrieve samples from her unique biology, he rampages through the hospital, murdering the Firefly soldiers between him and his surrogate daughter. Ellie’s death would further extend the chaos of the world, introducing a new chapter of rebirth in the apocalypse. Joel, having grown accustomed to surviving the ravaged country and, more importantly, having come to view Ellie as a replacement for the child he lost at the beginning of the game, is unable to allow more unpredictability to spread. In an act of ultimate narcissism he exerts his will through extreme violence and removes the possibility of disorder by taking Ellie away from the Firefly scientists, destroying any chance for a brighter (but uncertain) future, and ensuring that the reality that makes sense to him is protected.

After Joel kills Marlene and escapes with an unconscious Ellie, the player is given control of the latter character for a brief epilogue. There’s a sickening sense that Ellie has become a kind of prisoner to the man who was her friend during this sequence. She trails behind him through the woods as he compares their walk to the hikes he used to take with his daughter. She is forced to accept his hand to climb up a boulder blocking their path. The tall tree trunks surrounding the path the two characters are moving through boxes them in like the bars of a jail cell. Order has subjugated chaos entirely. Joel has defeated uncertainty, striking a powerful blow against the possibilities inherent to uncertainty. In the conversation that follows, Ellie says that she feels like she’s cheated death too many times. She asks Joel to swear that what he has told her regarding their flight from the hospital–that there are other people capable of withstanding infection and providing a vaccine just like her–is true. He does. He exerts order in the most potent way he can–recreating his pre-apocalyptic family life by bending the chaos that Ellie’s actual desires represent to his will. He takes away her ability to give her life in service of renewal, the ultimate acceptance of the world as it is.

The player is left thinking of all that has been lost in The Last of Us‘ world after this scene brings the story to a close. Until the final act of the game, it seems as if the duality represented by Joel and Ellie could find harmony. As the two of them fight off infected monsters in a sewer system they also find the remains of an outpost where children were being taught in a makeshift classroom. Even while repelling the invasion of murderous raiders in a resurrected power plant, the player remembers that Joel and Ellie’s current battle is to defend the interests of a self-sufficient commune. There are moments throughout the entirety of The Last of Us that demonstrate the necessity of maintaining the balance of chaos and control. But, ultimately Joel’s myopic, violent worldview wins out and makes Ellie’s vast and selfless one subordinate to it. This is a grim ending, forecasting a post-apocalypse where the strict logic of Quarantine Zones, military police, and the boot heel of violence will be indefinitely dominant, repressing the creativity bred when the irrational and rational work together. As a modern take on the apocalypse myth, The Last of Us offers a disturbing statement regarding today’s world. The tendency to bind the unpredictable with moralized lawmaking and totalitarian politics was responsible for most of the 20th century’s greatest horrors and, as the global community continually changes–the breakdown of nation states, religious power structures, and imperial control–we can only speculate as to how the world will collectively react. An ideal future is one where even the most unthinkable calamities are met with an appropriate mixture of pragmatism and free-thinking. The Last of Us argues a more pessimistic alternative–one where the the chaos of the apocalypse is fully subjugated with the brutal imposition of order.

+ I’d love to read criticism that fully explores the implications of the gendered oppositions created by Joel–the symbol for masculinity, violently attempting to assert order onto a chaotic world–and Ellie, a creation of the apocalypse who, as a living potential vaccine, represents only further uncertainty. That’s a deep rabbit hole, full of Hélène Cixous and Jacques Derrida, that I couldn’t go down here without turning this into a book.

Reid McCarter is a writer, editor, and musician living and working in Toronto. He has written for sites and magazines including Kill Screen, Pixels or Death, Paste, and The Escapist. He is also editor-in-extremis for videogame site Digital Love Child. He tweets tweets @reidmccarter.