I shot a gun for the first time about two weeks ago. I mean, I shot a real, physical gun for the first time– I’ve been shooting digital ones for years now. It was an interesting experience: one that has stuck in my head, and has made me think about my relationship with the many, many firearms found in videogames a bit differently.

I was nervous to head to the range, but I was going with a cousin who has been hunting since he was young, has a gun license, and knows how to teach an anxious novice how to shoot. Just the same, I felt like a visitor to an alien world when we bought our day passes from the front office and headed through a shop stacked floor to ceiling with boxes of ammunition. Hearing shotguns blasting at clay pigeons and rifle shots crack in uneven intervals had me stifling flinches as we drove down the path to the firing range. The body’s instinctual reaction to gunfire is probably to hit the ground or run like a maniac, but this is obviously discouraged at a professional shooting venue so I tried to keep as calm as possible. Still, while my cousin unzipped his two rifles from their carrying bags and took off their trigger locks, I was transfixed by the row of people to our left. They seemed so relaxed–maybe a bit excited, but still relaxed–as they unloaded rounds from the sort of high-powered weaponry I’d only seen in movies and games before.

I was certainly a lot more nervous when it came time for me to take a turn with the Polish-made M44 (a gun I knew from World War II history and, yeah, the Soviet levels in the first two Call of Duty games). My cousin is a good teacher, though. He told me what to do, corrected my posture, and helped me figure out how to make sense of the intimidating collection of wood, metal, and violent death that I was sighting down range. By the time I was slotting bullets into my second cartridge I was out of my head somewhat, ready to actually absorb some of the experience I was taking part in. I started to think about how my mind was processing the act of firing this rifle–how, like the good ol’ citizen of a postmodern world that I am, everything about the very real gun in my hands was being filtered through roughly 27 years of media expectations of what shooting is supposed to be. 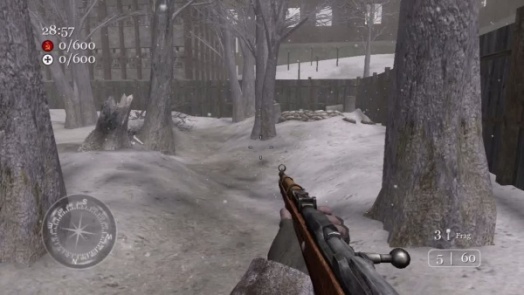 The differences between virtual and real guns are immense. I think every videogame player knows this on some level, but I’m also willing to bet that, even if only on a subconscious level, the hours we spend looking down digital sights feel like some type of training for actual gun use. Sure, there must be some correlation between headshotting Russian ultranationalists for hours on end and actually hitting a target, but there is an enormous gap between shoulder button tapping and the real sensation of fingering back a physical trigger. By the end of the day I was able to hit a metal gong from 200 yards away several times in a row. Maybe this was something helped by experience with games or maybe my improvement in aiming was just the result of good instruction, luck, and some practical improvement. Either way, no videogame taught me how gunpowder smells or the irrefutably murderous feel of running a finger against the sharpened tip of a full metal jacket.

Videogames remove us from the physicality of using a kind of weaponry that is, no mistake about it, innately physical. The resistance of a pulled trigger; the backward thrust of gun butt into shoulder and chest; the smell of burnt powder; the incredible noise–all of these are elements of shooting that may be digitally imitated, but not yet fully replicated. When a game simulates battlefield injuries we flinch in empathy even if we’ve never been stabbed or tossed through the air from an explosion. Everyone has accidentally been cut or burned. Most people have broken a bone. We’re able to approximate the experience and respond accordingly. Since shooting guns acts as the mechanical foundation of so many games, it feels somewhat important to recognize the gravity of the act–the simple pulling of a trigger–in order to create a similar understanding.

I’m an advocate for gun control. I don’t want the people living around me to be able to carry concealed pistols or keep a loaded rifle in the backseat of their car. Despite this I rode back from a day spent shooting guns feeling like I had learned something valuable. Of course, in the abstract, I’ve always understood just how deadly firearms are. All the same, the prevalence of guns in the videogames I play has definitely normalized them to some extent. This is a touchy subject for those of us who defend the medium against ill-informed attempts to link horrific school shootings with time spent playing games. I would still maintain that fears regarding playing Battlefield leading to murdering real people are unfounded, but I do believe that desensitization can couple with unrealistic expectations to make guns seem less powerful than they are. The effects of this must be far-ranging. Someone may not be more likely to kill a classmate, but they might perhaps join the military in part because of mistaken impressions?

Has there been a game that fought back against this lack of real accuracy? Because videogames are so greatly concerned with both interactivity and virtual gunplay, they seem like the best possible candidate for attempting to replicate the actual experience of firing a weapon and imparting the seriousness of that act. This feels like something we need. I wouldn’t blame someone for being unwilling to go anywhere near a gun range, but I do think a lot of people would benefit from what can be taken away from the experience. Misrepresenting firearms–making the act of shooting nothing more than a tapped button, underwhelming sound effect, and tiny controller vibration–seems irresponsible when it becomes such a common mechanic. One solution is to diversify videogames so that the medium is less dominated by faux-realistic shooters. Fortunately, this process is already happening just outside of the mainstream publishing model. What would be good to see, though, is a big, blockbuster title that features traditional shooting gameplay while also attempting to reinforce its weight. Just as something like Naughty Dog’s The Last of Us or Yager Development’s Spec Ops: The Line subvert the familiar trappings of third-person action by reflecting on the usually mindless violence inherent to the genre, so too could a savvy developer depict gunfights that make the weapons feel truly deadly. Imagine a first-person shooter where the player character is someone other than a professional soldier–someone who reacts bodily to the firing of a rifle. Or a game where the sound of an unmuffled gunshot causes the camera to jerk away from centre and the borders of the screen blur in response to the shock of coming under fire.

Obviously this approach wouldn’t work for every game, but it wouldn’t hurt a medium so saturated with gunplay to find ways to incorporate a true sense of realism when appropriate. We’ve become inured to digital guns and that can have consequences if left perpetually unchecked. This is an issue larger than just games, but when we consider just how many of our favourite titles revolve around shooting it seems like they might be a good place to begin changing perceptions. Granted, my experience with guns is drastically different from others. I grew up in a small town in Ontario, Canada where guns were the province of hunters or farmers and were in either case kept under lock and key, never really discussed amongst my friends and I. Others are sure to have a greater familiarity with firearms and their perceptions will differ from my own. Regardless, I’m willing to bet that there are many people like me who, though understanding the danger inherent to guns, have formed most of their knowledge of them through art and entertainment. Considering the debates on gun control that continue to rage throughout many parts of the world, helping videogame players to better understand the nature of these weapons seems worth pursuing.

Reid McCarter is a writer, editor, and musician living and working in Toronto. He has written for sites and magazines including Kill Screen, The Escapist, and C&G Magazine. He is also editor-in-extremis for videogame site Digital Love Child. His Tweet-fu is strong @reidmccarter.