In university I had an English professor who taught a third year criticism and theory class. On the first day he handed out the syllabus with a wry smile on his face. When we looked at it we understood why. The class was broken up into lectures that steadily progressed through a long history of Western literary criticism.

This meant that we’d be spending the rest of the semester reading dense text from Horace and Longinus to Baudelaire and Foucault.

“I know that you’re probably not looking forward to the reading,” he said. “But you have to work hard at dry material to get a proper understanding of literature. My class is about doing that. It may be more enjoyable to read more exciting texts, but this semester we’re not having cake. We’re all going to have to eat our hay together.”

That turn of phrase has stuck with me ever since. In some classes the reading was pleasurable, the syllabus filled up with Alice Munro short stories and Mark Twain novels. In others, like this criticism/theory class, I spent nights trying to unpack huge ideas from intricately written essays and drinking heart-stopping amounts of coffee in an effort to stay  awake through gargantuan Victorian tomes penned by Britons who were paid by the word. Just the same, by the time I graduated I appreciated what I had taken from all the effort.

I’ve tried to keep eating my hay on personal time. Since graduating I’ve supplemented a diet of “easy” fiction with bales of James Joyce, Fyodor Dostoyevsky, David Foster Wallace, and Leo Tolstoy in an attempt to keep my reading as full of nutrients as possible. I’ve also found that trying to do the same with both listening to music and playing videogames has been valuable.

“Eating your hay” applies to all media, meaning that playing “important” games can be as simultaneously frustrating and rewarding as working through a tough book like Ulysses or finding the rhythmic heart beating beneath the sonic wall of a Lightning Bolt song+. Videogames can be even more difficult to experience than a book written in challenging prose or music that defies easy understanding due to their difficulty, though. Since games nearly 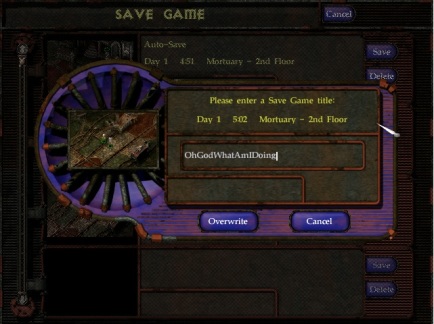 always focus on challenging the player it’s entirely possible that even the most dedicated audience will be unable to see the conclusion of something they’re interested in. No matter how initially baffling a song may seem on first listen, the only real hurdles an interested party has to overcome in understanding it is patience and an open mind.

Compare this to a few of the role-playing videogames that occupy the medium’s (rough and constantly reinterpreted) canon of important works. Planescape: Torment first presents itself as a battle of will between the player and the game’s seemingly impenetrable use of invented nouns and verbal lingo. This isn’t too much unlike reading a fantasy or science fiction novel, though, and can be overcome by anyone who is properly persistent. The real trouble comes when a combat system is introduced that makes progressing to the next story beat a bit like trying to see through to the other side of a brick wall by repeatedly slamming your own head into it. Despite playing a good number of games, the basic mechanics of something like Torment can stop me in my tracks++.

Even games without a high level of difficulty or steep learning curve can be tough to make it all the way through. The Super Nintendo RPG Earthbound is very straightforward from both a narrative and gameplay standpoint yet it suffers from the kind of issues that can make actually getting from introduction to epilogue feel like a chore. The main quest can feel meandering and aimless, the combat incredibly repetitive, and the level of difficulty bounces all over the place. Despite these problems, players who can’t force themselves to work past these problems will end up missing out on something that is undoubtedly important to the history of videogames. Earthbound‘s director, Shigesato Itoi, is evidently a very smart man, and a gifted developer. The game has a lot to say, not only about other Japanese-made RPGs, but about America, childhood, and a myriad other topics that are definitely worth struggling against the occasional bout of boredom to experience. For all the times that its uneven design makes the player want to give up — each time a character is knocked out and has to be revived after an arduous trek to a hospital — it ends up being difficult to remember these issues once the credits have rolled. The ultimate impression left by the game (and of so many other “important” works that are tough to enjoy in a traditional sense) is that the experience was worthwhile.

And that’s the real point of eating your hay; you chew through mouthfuls of dry stuff and end up getting something out of your lack of immediate enjoyment. There’s something valuable to this process and it’s worth encouraging others to do. Sure, there is always a faster way to get enjoyment out of entertainment, but some of the longest lasting kinds of gratification come when the payoff is deferred a little bit. Struggle through games you’ve been putting off playing; read that giant book that you’re afraid of starting; check out bands whose music sounds like nothing but noise on a first listen. In a lot of cases, the kind of media that is held up as “important” — no matter how stuffy or bizarre the content may initially seem — is worth the effort in the long run.

+ Of course, not every classic is tough to enjoy. The Iliad is actually a lot of fun, The Beatles are a constant joy, and playing Super Mario Bros. 3 is a goddamned blast.

++ This example is minor compared to how difficult it can be to experience a reflex-based action game. If Super Meat Boy has a mind-blowing ending I won’t ever get to see it without help from YouTube.

Reid McCarter is a writer, editor and musician living and working in Toronto. He has written for sites and magazines including Kill Screen, The Escapist and C&G Magazine. He is also editor-in-extremis for videogame site Digital Love Child. His Tweet-fu is strong @reidmccarter.