This is an article that I originally wrote late last year, but that fell through the cracks for some reason or another and never saw the light of day. Aside from dated references to the 2011 Spike VGAs, I think it’s still relevant and worth sharing. I’ve made tiny little revisions and expanded on a few points, but left it alone otherwise.

The 2011 Spike Video Game Awards (VGAs) was a ceremony that celebrated pretty much everything awful about videogame culture. The parade of mock teabaggings, awkward celebrity endorsements and gleeful misogyny were all bad enough on their own, but what troubled me most about the VGAs was how all of this was aimed at a supposed subculture of “gamers.”

We, the people who love games, have done this to ourselves.

I really enjoy videogames. They’re fun, they can be intellectually stimulating and the medium is full of artistic promise, but I am not — and never will be — a gamer. Labeling oneself as such is one of the worst things that anyone can do. This tendency ignores the fact that everyone is made up of different parts — that no one neatly fits inside of a stereotype. I can’t call myself a gamer when loving games makes up only one small part of my identity. I’m a writer, a musician, a reader, a brother, a son, a friend, a partner, someone who loves ideas, someone who detests bigotry, and much more. None of these elements of myself fit within what the label of gamer is supposed to mean — and I suspect everyone else branding themselves as members of the supposed subculture, if they thought about it, would feel the same way.

This is because labels are now — and probably will always be from this point forward — the creation of marketers. What videogame enthusiasts consider to be “gamer culture” is an invention. It requires buying in, part and parcel, to an identity that has been assembled piecemeal by companies trying to wrap their head around how best to make money from a rapidly expanding industry.

There’s really no such thing as a gaming sub-culture anymore — there are mostly just people who believe in the value of videogames and enjoy spending time playing and discussing them. The entire concept of a gamer is a holdover from a lost time when playing electronic entertainment was a marginalized activity, when being immersed in the burgeoning “videogame culture” was an active choice requiring commitment to a group of niche enthusiasts. Sure, the general public (specifically much of the older generations) may not understand what the typical videogame player is actually like, but that’s not a problem we can solve by stamping ourselves with an easily exploitable label. 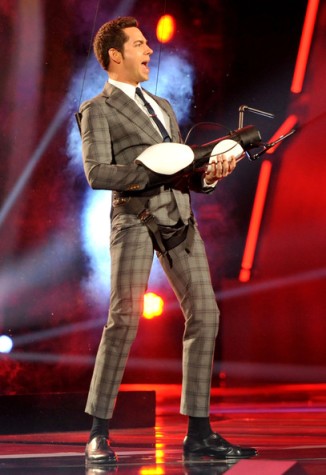 Spike executives believe “gamers” (which ends up encompassing everyone who enjoys games — not just the self-identifiers) are the kind of people who want their award shows to feature Brooklyn Decker and Felicia Day bobbing for cupcakes (complete with Day enticing cat-calls with a painfully self-aware “gamer girl” joke about having +20 agility to her mouth). We are all supposed to, by virtue of being people who are enthusiastic about videogames, be into this sort of thing. Zachary Levi, the show’s host, also has to remind us not to be racists, sexists and bigots in a monologue about “online douchebags” before a night full of, well, bigotry and sexism.

This is a show aimed at “gamers”, meant to provide the kind of jokes, cheap thrills and celebrity cameos that such a subculture would enjoy. And this is dangerous because, once outside entities begin to define a culture for marketing purposes, the nebulous culture in question will begin to be associated with, and even take on, some of the traits designed by these outsiders. The VGAs aren’t alone. Because a “gamer” identity exists, sites like Kotaku (the self-proclaimed “Gamer’s Guide”) are given free passes to exercise wanton misogyny (check out these ladies in sexy costumes!) and implicit racism (learn more about “whacky Japan!”) as part of their role as a blog “for gamers.” The people who read sites like Kotaku don’t necessarily visit the blog — or watch the VGAs — because they’re looking for this sort of material. They come to it because, like me, they want to read about videogames. What’s dangerous is how, by simply wanting to engage with game information, they’re forced to see their interests/identity as tied into an invented culture of sub-sophomoric attitudes toward sex, gender, race and violence. It’s frightening to think of all the 12 or 13 year olds, social outlook still developing, coming to these bastions of “gamer culture” and thinking that this is where they belong.

Instead of allowing this sort of thing to propagate, I propose we let the idea of “the gamer” fade back to its rightful place: the past.