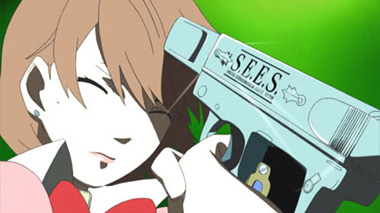 The Persona series is revered, the third and fourth entries to the series being particularly adored. A lot of platitudes are tossed around about these games, including (but not limited to) bold claims like their being “saviours of the Japanese role-playing game.” Obviously this warrants investigation so, about two months after buying a PlayStation Vita and playing three actual Vita games on it, I ended up downloading the PSP version of Shin Megami Tensei: Persona 3.

Now, a few hours in I’m willing to take a (self-inflicted gun)shot at trying to unpack just what it is that makes this game compelling to so many people.

A strange metatextual thing: my favourite aspect of Persona 3 so far has been the game’s use of time scheduling as a gameplay mechanic. The story centres around your player character, a teenager with the kind of astonishingly manicured hair that many 16 year-olds would give a limb to possess, moving into a dormitory and attending highschool while unravelling the mystery of The Dark Hour, a hidden time of night where select individuals maintain consciousness and fight Shadows (i.e. monsters) while the general populace slumbers on, none the wiser.

Since the main character (the portable version of Persona 3 lets you pick from a male or female protagonist, but advises newcomers like myself to choose the regular version’s boy, which I did) is just a regular kid, s/he has to balance the insane discovery of a hidden world with the everyday demands of the mundane. Throughout the week you must choose how to spend your free time. Hang out with friends, study, work shifts at a part-time job, get some extra rest or tucker yourself out combatting Shadows and, possibly, saving the world. This, aside from the extradimensional heroics, reflects an actual highschooler’s life pretty well. 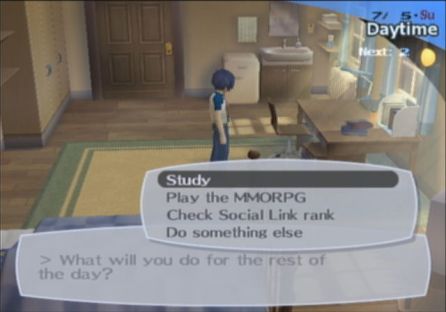 How many of us had to choose whether to spend the night studying or playing videogames? Did you ever consider calling in sick to work so you could go and do nothing with your friends? Persona 3 is a game as much about beating back demons as it is about managing your time properly. That it encourages you to make constant sacrifices is to its benefit: being smart, having good relationships and earning cash all confer tangible gameplay benefits, each kind as worthy of attaining as another. But, of course, you can never have it all. Spend too long doing one type of thing and you lose out on the rewards that another activity would bring. That’s a whole lot like real life.

This ties in with my own concerns regarding the game, hence the idea of metatextuality mentioned above. A quick search on how long the game is gave me a pretty staggering return, suggesting that playing all the way through Persona 3 would suck up literal days of my life. Despite how engaging it has already been, being presented with the idea of spending 50+ hours exploring a single game is kind of terrifying. I haven’t balked at diving headfirst into long books like Infinite Jest before, but, still, every time an audience is asked to devote such a massive amount of free time experiencing one piece of art/entertainment, that book/game is making something of an intrinsic promise to exchange your willingness to participate with some kind of personal, intellectual growth. So far Persona 3 simply seems like a fun game with an okay story, not necessarily something that will leave me a different person by the time I’ve finished it. 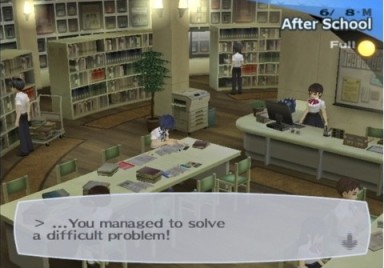 So, do I spend extra time with friends, devote hours to picking up extra writing contracts, work on this goddamned novel edit or play more Persona 3? When it’s written out like that it’s easy to imagine how those choices — and the benefits they offer — would factor into my in-game decision making. Normally I might not think so much about this sort of thing, but Persona 3, with all of its time management focus, has sort of guided me toward it.

By creating a game where time management is always at the forefront of my mind, Persona 3 is also always reminding me that there’s something else I should be doing rather than playing a videogame. Whether this is good or bad is anyone’s guess. There’s nothing wrong with entertainment for entertainment’s sake, but the strange proposition of painstakingly guiding a virtual avatar through a schedule — picking and choosing how to maximise her/his time — when I’d probably be better served by applying the same type of management to my own life is somewhat troubling.

Nonetheless, I’ll probably pick away at the game some more, maybe slotting it into the EVENING block of time where options include:

– the combat is really fun!

– I wish there was an option to have your character “play” Persona 3 within Persona 3 that made her/him level up faster, but also lose her/his mind