My first experience with a Bioware game was Dragon Age: Origins. At the time I didn’t know much of anything about the studio, what their “return to roots” project meant to people or, really, what I was getting into at all. I just read a lot of really good things about a game — namely, the amount of narrative choice it offered players — and thought it would be worth trying out. Now, having played two Mass Effects, two Fallouts and Skyrim, I’ve gone back into the first Dragon Age with, maybe, a bit more of an understanding of how to approach these kind of massively customizable RPGs (MCRPG?) and a better grasp on how to play off their shortcomings.

In short, I’ve learned how to communicate with a videogame by speaking its own language.

The central conceit of Dragon Age: Origins — and games by its developer Bioware in general — is that the audience is able to play an instrumental part in foreign worlds by interacting with them based on the personality they choose to take on. At least, that’s what I’ve always thought. The player is meant to approach a strange new place — whether a pseudo-Dark Ages style fantasy nation or a humanity living in space far into the future — and hurl themselves headlong into its culture and politics. While, quite often, this type of interaction involves killing things, the Bioware approach also involves changing the world by talking to people. This is one of my favourite things about their releases: violently exploring an environment is often bookended by encounters with a cast of characters involved in the conflict. The player is asked to learn more by asking for information, sometimes customizing the beginning or end result of battles by taking sides on difficult moral issues or just showing off how much of a nice person/jerk/inappropriately sarcastic weiner they are.

The problem, though, is that conversations in Dragon Age do not, as much as we may want them to, resemble actual social interactions at all. The first time I played the game it was pretty disappointing to start talking to a character, come to a break in the conversation and then have to pick a fairly detailed line from a list of possible responses. My sense of agency was yanked away, replaced with a pre-set variety of responses that never quite encapsulated what I wanted my character to say. “Do you think that we should massacre this castle to make sure that anyone infected with this highly contagious evil disease doesn’t have a chance to spread it?” a big knight may ask. I’d like to suggest that we could avoid slaughter by, maybe, putting everyone in a quarantine and taking a bit of time to weed out the infectious. Instead, I’m allowed to respond from a list of choices like, “Kill them all. I want to bathe in their blood.” or “Let them all free! Not a single person will be hurt!” or “Tell me more.”

Well, what did I expect? I guess, really, it shouldn’t have been anything more than what I was given. After all, Bioware do a far better job than most developers in crafting role-playing games where some sort of role can actually be created and maintained by players. Just the same (and this hearkens back to the kind of problem I had with Skyrim), the closer a videogame gets to achieving something really great, the more apparent its flaws become. When nearly every aspect of a character can be developed and explored throughout a massive, open world full of interesting choices the onus is on the studios that make these games to flesh out some of the more human options.

We’re on a path forward, of course, and these conversation systems represent just one piece of the ever evolving videogame organism. And that makes me think, well, if I’m ready to criticize something then what would I suggest in its place?

The list (or, wheel) of choices offered by Bioware is far more substantial than most other games and that’s a great start (the greater the variety of options, the more subtle the nuances of a response’s implications), but, as far as I see it, the major issue is that each dialogue choice hints at a possible outcome. Just as you can be sure that killing a Little Sister in Bioshock will give you “evil points” and saving her “good points”, the same applies (in a less direct way) to Dragon Age: Origins conversations. When too much information is provided the after effects are telegraphed too far in advance. This is in direct opposition to so many real-life interactions. If a stranger approaches me on the street and asks me for my views on the continued deployment of Canadian troops in Afghanistan, I have no idea what the “correct” answer is. When a beleaguered City Elf in Dragon Age asks what I think about their struggle for freedom becoming violent, though, learning how to respond to the dictated context is much less dynamic. 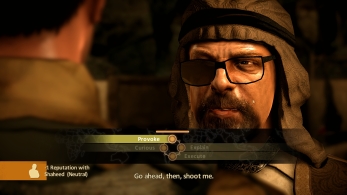 This isn’t good! Games should, ideally, be approachable from any perspective. They shouldn’t come with prerequisites that ask players to know how their mechanics will track responses and shape the world. This, I think, is one of the reasons why communication is so broken in even the best conversation-focused videogames. Developers seem to approach every aspect of their design work with the kind of cause/effect mindset that is essential to creating titles that play well, but can also have the unfortunate side effect of systemic writing that is more robotic than it needs to be.

Alpha Protocol, while a bit of a mess in many respects, at least came closer to providing a good facsimile of conversation. The game’s timed responses mean that players have no time to carefully consider the desired effect of everything they say. Much like real life, when a person asks you a question in Alpha Protocol, you can’t spend time thinking about the exact ramifications of your response. You choose the kind of spy you’re playing and react appropriately given what you know and how you wish to portray yourself. The ultimate effect feels far more organic than anything else I’ve experienced. Sure, there are less options on the table at a given time, but the spontaneity that comes with a greater emphasis on natural communication ends up creating the impression of a real, dynamic conversation.

If this kind of system were implemented as a part of a game like Dragon Age: Origins, the end result would be fantastic. Dragon Age 2 and the Mass Effect series already showed that bringing player attitude to bear on responses leads to a more natural feel with their wheel communication system. Taking it a step further with time restrictions would help make conversations come off in an even more realistic manner. Sure, this kind of system wouldn’t solve every problem, but it at least offers something far better than the videogame communications we currently have.