And Passage has none of that. What do you even do in this game? Walk to the right? Engage in purposeless exploration?+++ What kind of life is that; idle wandering through a meaningless maze, picking and choosing treasure to collect, except when your SIGNIFICANT OTHER gets in the way! Just wandering about, taking treasures as you find them; no goals, no purpose, just never-ending series of idle diversions. A poor life. A dead life.

You can wrap shitty mechanics in as much ‘meaning’ as you want. Doesn’t make either of them worth anything 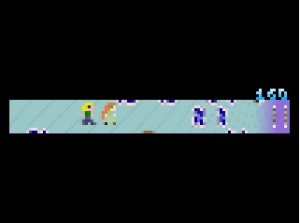 We turn now to Passage’s other, and far worse sin; the damage it has done to the way we talk about games. Flaws within the game can be forgiven; ambition, reach for stars, go big or or go home, et cetera et cetera. But to not even fail in your goal, but to actively HINDER it’s broader achievment . . . it’s a terrible accusation, and not one I make lightly.

Passage has cemented the idea that ‘artgames’ don’t have to be good, cementing mediocrity as a noble aspiration. As long as they’re ‘trying’, as long as it’s pretentious enough, we can let it slide. Nay, not even let it slide, as long as it’s vain enough we can even CELEBRATE it, hold it up as this noble example of WHAT COULD BE, a REAL FUTURE for THE ART OF VIDEOGAMES™.

And what a future it is! A future of Museums, of art collectors, of fancy parties, cocktails and pianos and galleries and high society and all the shit that keeps art from meaning anything to anyone. A future of death and stagnation, where life is not lived, but submerged in formaldehyde for people to gawk at and IMAGINE. Could you IMAGINE that? Wow! While the jaded stand here, sipping their drinks, I BEHOLD and APPRECIATE. And they’re not thinking the same thing, no they’re all empty inside, but not ME. I have a RICH INNER LIFE.++++ I really understand this ART, and that makes me BETTER.

We have the potential to make a new world, a new (I’m gonna say it (someone stop me (lol))) ART and all we can think of is more of the same? Of contorting and brutalizing ourselves to fit the old model? Museums are nice to visit, but who wants to live there?

So there you have it. Passage is such shit, it’s poisoning the future of videogames, dragging us down into a cesspool of filth. Pretty impressive for a 256×33 screen game, with (shit) chiptune music.

+ AKA The ‘Game – play’.
++ This focus on the ‘illusion’ of being living and breathing is honestly at the core of why most games are shit these days (SEE: Zelda, Mario, Passage, Bioshock, etc.).
+++ Meeting the chick makes certian exploration impossible. That’s so disturbing and self-centered. Fucking privilege bro.
++++ Slavoj Žižek does a wonderful takedown of the RICH INNER LIFE b.s. that people feed themselves in First as Tragedy, Then As Farce. Read it.+++++
+++++ Passage‘s only meaningful achievement: allowing me to mention in Slavoj Žižek in the context of videogames. ARTCHIEVEMENT UNLOCKED

Adam Burch was put on this Earth to play God Hand and chew bubble gum . . . and HE’S ALL OUT OF BUBBLEGUM! He programs robots and videogames and is ruining esports. He wants to start a game studio one day, release a spiritual sequel to God Hand and live the rest of his days bitter that it didn’t make him filthy rich. Read his blog Thus Spoke Pi or follow him on Twitter @roughly22over7.