What is the defining feature of Super Mario Brothers? Not in the boring terms of cultural cachet, but in the actually interesting terms of game design? What is it that sets SMB apart? We talk and wave our hands about, and mumble words of “gameplay” and “level design”, but what is the core, the glue, the absolute center around which they revolve? Does such a center even exist?

I propose that it does, and that it has a real name: Clear Visual Language.

And so, enter stage 4th wall, comes our noble protagonist; Space Giraffe. Where other designers cry ‘INNOVATION’, yet adhere religiously to the dogma handed down from the Mouth of Miyamoto, the Word of Mario, Space Giraffe stands tall, and claims that even this holy doctrine must be cast aside. 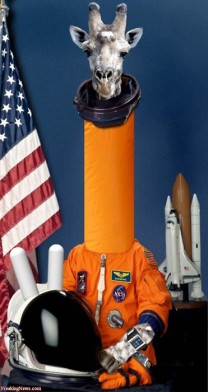 And for its heresy+++, Space Giraffe was punished, and yea, it did lose money. So much money.

Seriously, no one bought this game.

Space Giraffe is a brilliant work of art, a masterful piece of work that ensures beyond any reasonable doubt that its creator is one of the greatest game designers on the planet. Not only does it take Tempest, the raw core, and expand and permute it with all manner of variations and nuances, but it also casts off the most sacred of texts, the guiding thought that has been with us for so long, that is so ingrained into our game design psyche that it has reached the purest position that any ideology can attain — that of invisibility — and renounces even that.

Games are about perception and action, with an emphasis on the action.

Space Giraffe is about perception and action, with an emphasis on both. In Space Giraffe, you must CHOOSE what you percieve; you must decide to use you precious mental resources++++ to choose where, and what to see.

Or, to quote the most wonderful woman in my life: “Space Giraffe is the best.”

+ So-called because of my own skepticism of auterism in videogames.

++ Note that minimaps, in this sense, extend player sight.

+++ And the fact that it was first on the XBL marketplace, and the fact this it was at a low price point, creating an illusion of poor value, which makes it a heretic thrice over.

++++ IMPORTANT: Not some face fucking number in the game but a REAL ACTUAL THING YOU HAVE.

Adam Burch was put on this Earth to play God Hand and chew bubble gum . . . and HE’S ALL OUT OF BUBBLEGUM! He programs robots and videogames and is ruining esports. He wants to start a game studio one day, release a spiritual sequel to God Hand and live the rest of his days bitter that it didn’t make him filthy rich. Read his blog Thus Spoke Pi or follow him on Twitter @roughly22over7.

Ed: Credit to Freaking News for the fantastic astroraffe image used above.