There’s a healthy amount of debate occurring in games criticism right now about how far the concept of gamification* should be implemented into our daily lives. It’s a rich topic that is as much about human psychology as it is about videogame theory — and one that much smarter people than I have already spent a lot of time intelligently discussing.

I’d rather try to look at it in a different way.

Not very long ago, sex was one of the big taboos in mainstream games. Although hyper-violent titles were slapped with an M rating and sent on their way to be readily devoured by audiences, trying to implement sex was frowned upon in general. This isn’t surprising. The North American entertainment model has always been quicker to accept violent content than sexual material, and videogames, a younger medium, have unfortunately followed suit. But as the main demographic of game players has moved away from kids and teenagers to a wider audience made up of varying age groups, the viability of sex as a game element has grown. This is just fine — except, sex in games still isn’t being handled properly.

BioWare, developer of RPG series like Dragon Age and Mass Effect, has been lauded for its relatively mature take on sexuality in videogames. This is mostly because they’ve been level-headed enough, in titles where character creation is essential to the their game’s intended experience, to introduce the option to pursue gay — and even human/alien — romance alongside heterosexual choices. This is fantastic and deserves the recognition it gets but, ultimately, the way that the act of sex itself is represented falls far short of the more impressive “courting” writing.

That’s because sex in these games is represented — through traditional game mechanics — as the end goal of romance.

In BioWare’s two current RPG series players are able to begin a relationship with the man or woman of their fancy and pursue that relationship as a subplot to the main events of the storyline. This is a neat idea, although poorly executed. The way a Player Character (PC) goes about wooing a Non-Playable Character (NPC) is eerily similar to the way they’d, say, level up their skills. Fill up an invisible metre by giving gifts, engaging in frequent conversations or helping them with their problems. Basically, the PC just has to spend enough time trying to fulfill the objective of having sex with an NPC and they’re able to make it happen. After doing so, the player can choose to engage in further (less carefully written) conversations with their partner or begin pursuing another NPC they’d also like to have their character awkwardly rub up against in a brief cutscene.

It all seems uncomfortably close to the “pick-up artist” culture, propagated by professional weirdos like Mystery, and described by shows such as VH1’s The Pickup Artist or books like Neil Strauss’ The Game. To keep it within the medium, it’s also similar to the genre of Japanese dating simulators where the end goal can be either going steady or having sex with the player’s favourite cartoon character. This too is done by properly manipulating the game’s mechanics and “solving” the way toward virtual intimacy. In both of these cases sexuality, and particularly women’s sexuality, is portrayed as something not unlike a videogame objective: understand how to exploit their personalities and, soon enough, it’s possible to have sex with them. Instead of attempting to translate (even a little of) how sexuality is tied up with complex psychological elements like personal attitude or preference, we have a system where it’s boiled down to a basic goal that can be achieved if you know the right steps. Both of the above instances posit that sex can be “accomplished” by referring to a book — or reading GameFAQs — and following the provided rules.

The idea of sex as a game objective is pretty scary. It encourages a mentality that could influence the objectification of a given person’s sexual partner(s) and give the maladjusted disciples of pick-up artists a sense of validation. Society is already rife with these kind of attitudes and it’s only, I think, by not considering the consequence of gamifying sex that Dragon Age and Mass Effect come off badly despite their best efforts. It’s easy to condemn the dating sim genre for its sociopathic outlook on human relationships, but when the talented and ambitious writers at BioWare echo this viewpoint (whether consciously or not) it’s a lot harder to dismiss. 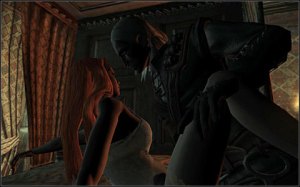 The next game series to broach sexuality in a direct way is The Witcher, yet another role-playing game. The first entry allowed players to get down with just about any virtual woman they crossed paths with. After the act, in a charmingly revolting touch that smacks of digital bed-notching, the inventory gains a playing card style painting of their latest conquest.

The misogyny of The Witcher isn’t encouraging, but its sequel at least showed some willingness to grow. The writers are still snickering about lesbianity and the designers take a decidedly one-sided approach to “sexy” character models (tight pants and low-cut peasant blouses are haute couture for the women of The Witcher 2 apparently) but at least recurring protagonist Geralt isn’t distracted from completing sidequests by his incessant hard-on this time around. He even has something resembling a real relationship, featuring (but not defined by) sex.

Despite the massive problem of male-centred sexuality in The Witcher series, it’s still easier to deal with than the mechanized representations offered elsewhere. What’s difficult is that the developers’ success may just be because of their ambition to craft a more linear narrative structure. Rather than allow the player greater agency, The Witcher 2 employs a stricter approach to storytelling that means sex is a part of the written plot. Instead of introducing true gameplay elements — and taking the risk of stumbling over them in the same (or worse) way as BioWare’s attempts — the game is able to come off looking better by taking sex itself out of the realm of interactivity and goal-meeting. 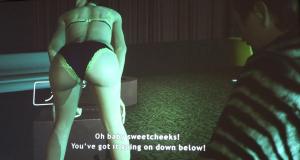 This said, the deeply flawed but compelling Heavy Rain probably offers the best model for the time being. While the game’s interactive sex scene (complete with timed button presses) is little more than an awkwardly prolonged version of God of War‘s mini-games, Heavy Rain offers up probably the most illustrative feminist gaming sequence to date — and, through it, an interesting take on how to explore a videogame cast’s sexual psychology. While investigating a possible lead in the title’s convoluted murder case, the character of Madison is required to get information out of a nightclub owner by seducing him. Players take direct control as she uncomfortably strips and waits for the right moment to hold him hostage and interrogate him. We are just as uncomfortable as Madison while she removes one article of clothing after another and just as revolted as she is at the slobbering club owner. The game, by making us complicit in undressing the character, allows us inside of her head. We feel as sordid and objectified as Madison does — and relieved when the situation is resolved before things have to go any further than the striptease.

Perhaps this is the sort of design more games need to understand before attempting their own exploration of sex as gameplay: the fact that it isn’t a clean, easily gamified activity and that there’s more tied up in it’s representation than just the act itself. Though Heavy Rain‘s example shows that it’s probably far easier to introduce gameplay mechanics to the darker side of sexuality than the happier, functional one, it at least demonstrates the potential for exploring it in a less objectionable manner than play mechanics leading to the gaining of an achievement.